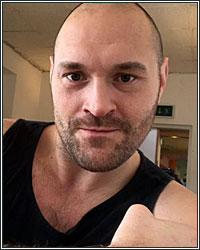 Hello boxing fans and dedicated haters. Here’s another week’s worth of my bulbous sack, bulging with gooey, salty truth, in your face. Enjoy. This week, we have comments/questions regarding Tyson Fury, Anthony Joshua, stay busy fights, and the state of “big” fights.

I enjoy your takes on all things boxing. What is your take on "stay busy" fights at the elite level? I was genuinely disappointed to see the Fury-Joshua fight fall through; again. With that said, I also felt the fight had no momentum with Joshua coming off two convincing losses against Usyk. So I guess I have two questions:

1. How much do "stay busy" fights matter when you're dealing with elite or mature fighters coming off losses? Meaning does a tune-up or confidence fight for Anthony Joshua against someone like Zhang Zhilei really repackage them into something else? I feel like you can match Joshua up with as many tune-ups as you want, but in reality you're just extending his shelf life for maximum paydays.

2. How much do "stay busy" fights matter when you're dealing with elite or mature fighters coming off of wins? Perfect example is Fury fighting Chisora. Clearly he wants to stay active. Clearly he does not want to take a risk fight that will cost him his title. I personally don't mind him fighting someone B-Level to stay active. But no more than 1 time. Is he better off sitting out? Should he fight someone more compettiive? Is Chisora "good enough" to keep him warm while remaining competitive? In my opinion, Chisora is a one off thing. It would have been more appropriate for him to just rematch Whyte, maybe fight Otto Wallin or just sit out. Can you hate on the guy not wanting to endanger a superfight?

Hey Greg. Thanks for writing. Let me get at these.

1. It all depends on the fighter and the circumstances. If the fighter’s problem is purely mental, a couple of good, solid wins will go a long way in helping him get back into gear and regain focus. They could also serve to fine tune any technical flaws the fighter has, assuming, of course, that he’s open to being fine tuned. In the specific case of Anthony Joshua, I have to believe that “stay busy” fights will just be extending his shelf life and long-term earning power. His particular issues are a mix of mental, technical, and tactical. Given who he is and the deference shown to him, it’s really hard to imagine him digging deep, from the ground floor up, to fix his flaws or, really, even have the perspective anymore to acknowledge them. Getting a vacated title belt and/or beating second-tier opposition will just serve the business needs of the side industry built around AJ. That Fury fight, right now, was a no-win for him and everyone-- Fury’s side as well as Joshua’s side-- knew it. Hearn would’ve been a fool to toss AJ into the ring against Fury in December. Kudos to Hearn for being able to tiptoe his way around backing away from the challenge without his guy taking too much flak from the public.

2. For a fighter in peak form, riding a wave of momentum, the “stay busy” fights are usually just wallet-padders. And, really, who can blame a top name for adding as much money to his nest egg as possible in a sport where your career could be over in an instant. In Fury’s case, though, there may be more to the padding than is normally the case with fighters. Fury’s reported ties with Irish cartel head Daniel Kinahan may keep Fury from being able to fight in the United States for the foreseeable future and may even affect his ability to continue on with his career. There’s come a certain urgency with earning for Team Fury in recent months and a decided fixation on UK-friendly fights. As I mentioned in this past Monday’s Notes from the Boxing Underground column, I don’t have much of an issue with the Chisora fight. Honestly, Chisora is probably a better, more deserving opponent than Manuel Charr or many of the other fall guy wallet-padder fights Fury could’ve taken. The problem is that Chisora, as a twice-defeated Fury foe, adds unneeded cynicism to a fight that should be shining as a glorious homecoming. From a competitive/sporting standpoint, I’d never suggest an elite-level fighter, in his prime, to sit out any substantial period of time. It’s just that, yeah, Team Fury could’ve done a better job with opponent selection and Fury, himself, could do a much better job in trying to justify this fight. No, champ, this fight is NOT historical...it’s a money grab...but you can get a pass for that.

What's up Paul? I’m late reading this week, so I hope this makes it in, being I never write in anyway. I usually ride with your rebel ass boxing mind, but as you would say this is not a casual fan sport anymore. So, the big fights we got this year weren't really appreciated as they should have been or "promoted" as such. I came up with 8 just typing this in. Let me know if I missed any since I get called a boxing junkie from time to time: Charlo vs Castano, Spence vs Ugas, Fulton vs Figueroa, Inoue vs Donaire, Shields vs Marshall, Beterbiev vs Smith, and Haney vs Kambosos 1. Not saying all were competitive in the ring, but they were great matches on paper and had more hype promotion-wise than they all should've received. Thoughts??? Keep up the great work!!!