NOTES FROM THE BOXING UNDERGROUND: TANK-GARCIA DREAMS AND REALITIES 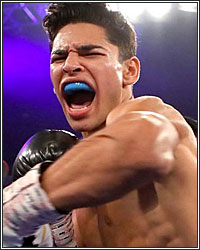 If you got a little trickle of adrenaline when you heard that Gervonta “Tank” Davis vs. Ryan Garcia was actually going to happen in 2023, you’re not alone. Even I, as jaded and as cynical as they come, got that little big-fight buzz up and down my spine when I heard the news. I mean, shit, this is a damn good fight pitting mega-talented, undefeated, 20-something stars against one another. These days, that’s as rare as finding a relevant, insightful article in Ring Magazine.

The news inspired me to hop on social media with my take on how things would play out:

“My take on Tank-Garcia? Garcia is a very, very talented kid with a one-punch weapon that ranks among the very best in the sport...but there's a long list of talented kids with a singular weapon who have fallen to more skilled, more seasoned fighters, especially a skilled, seasoned fighter who can seriously bang...Garcia has a chance, but I see it much more likely that Davis murders him...He's just much more of an all-around fighter with little subtle nuance and use of angles...and Ryan is chock-full of defensive liabilities and he suffers from an inability to coordinate any singular, tactical approach in the ring...Other than a bolt out of the blue-- which is possible-- I don't see him winning…”

Then I realized that I was talking about boxing, a sport that has become the undisputed king of cockblocking, self-sabotage, and bait-and-switch business practices.

Davis-Garcia, even with both fighters wanting it and both respective broadcast entities in agreement over logistics, is fragile as fuck. There are a myriad of possible ways it could fall apart over the course of the next several months.

Given that there’s no date or venue set and that no contracts have actually been signed, it’s hard to get too giddy about this fight being a real thing-- especially in boxing where news travels faster than truth.

If egos flare up or some petty dispute turns into a dick-measuring hangup, this could all fall apart. If some new money mark steps into the picture and dumps a ridiculous amount of loot on either fighter (or his team), we could see another Terence Crawford situation and a fight nobody wants to see for either guy.

This is not even taking into consideration that either guy could get hurt along the way or upset in a prelude fight to the big one. Davis’ opponent for January 7, Hector Luis Garcia, is an under-the-radar presence and definitely not someone to be taken lightly. Whoever Garcia fights en route to Davis (hopefully he’s actually planning on taking an interim fight) also has an outside chance of ruining everything.

Oh yeah, and there’s the big problem of Davis’ criminal trial in February where he’s facing hit-and-run charges that could carry a substantial prison sentence. Garcia’s mental health issues also present a possible obstacle, especially considering that, over the last few years, the kid’s pulled out of fights multiple times.

Even if there were signed contracts and a booked venue, there would still be a lot of time for things to get screwed up before we get to the fight. For sanity’s sake, I’ll just be assuming that it’s NOT happening until I see the ring walks.

Now that I’ve pissed enough on your sunshine and happy thoughts, let me just double back and lay some rose petals on that pungent piss.

Davis-Garcia is a great fight, a big fight, and an important fight for a flat-lining boxing scene. It could also serve as a template for making these kind of risky cross-company, cross-platform contests in the future.

It’s going to be hard to create fights like this that turn a substantial enough profit to make them doable, but having more and more big, compelling fights will energize the market and create a better atmosphere for revenue generation. As the old saying goes-- a rising tide lifts all boats. An enthused, captivated boxing market can only mean good things to the sport and to everyone’s bottom line.

If 2023 turns out to be as good as I opined in a recent article, with Davis-Garcia, Fury-Usyk, Plant-Benavidez, Haney-Lomachenko, Wilder-Ruiz, Bivol-Beterbiev, and Spence-Crawford (crossing fingers) potentially on the schedule, we could be in for a serious rebuild year. After a seriously crummy 2022, next year sounds like a godsend. Of course, if...if...if...if.

Now, watch boxing fans screw everything up by pirating the hell out of everything and/or refusing to support the promotions, proving that the risky fights like Davis-Garcia are simply not profitable enough to make.