KEITH FLORIAN: "THERE ARE A LOT OF THINGS THAT HAPPENED DURING THE FIGHT" 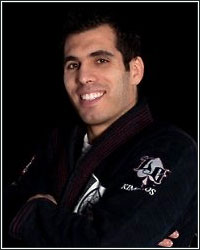 "There are a lot of things that happened during the fight that you may or you may not have seen. Kenny got poked in the eye, which BJ is notorious for. He did it against Matt Hughes twice in one fight and once in their first fight. He did it against Georges St. Pierre in both fights. He was hitting behind the head all of the time. Kenny won't say this, but I certainly will," stated Keith Florian, brother and trainer of UFC lightweight contender Kenny Florian, as he spoke about what went wrong in Kenny's title challenge against champion BJ Penn. Check it out!

PC: The fight didn't go the way you guys planned for it to. How do you feel Kenny fought?

PC: You told Kenny that he wasn't listening to you guys in between rounds 2 and 3 I believe. You also were telling him different numbers to listen for. You don't have to reveal what the numbers meant, but were the numbers different combos you guys were looking for?

KF: Correct! That's exactly right. In my opinion, the major factor out of everything is the layoff. Kenny had nearly nine months off before this fight and that really hurt him. There are certain things that happen to a fighter mentally when he's not fighting as often. He starts to question his technique a little bit and that's part of it. It's not all of it, but it had to do with some of it. There are a lot of things that happened during the fight that you may or you may not have seen. Kenny got poked in the eye, which BJ is notorious for. He did it against Matt Hughes twice in one fight and once in their first fight. He did it against Georges St. Pierre in both fights. He was hitting behind the head all of the time. Kenny won't say this, but I certainly will.

PC: Was there anything about BJ that kind of took you guys by surprise during the fight?

PC: During the telecast, both Mike Goldberg and Joe Rogan felt that Kenny was maybe trying to execute too much of GSP's gameplan against BJ and not use his own strengths, which is his kicks. Would you agree or disagree with that?

KF: I absolutely disagree with that. That's why they are commentators and not coaches. I really think that Joe Rogan was going a little too far with his comments and stuff. Maybe he needs to corner some fighters and get a little bit of experience and then talk, but that's the end of that. It wasn't really St. Pierre's strategy (laughing). It was a different strategy, trust me. There were certain things that he needed to do that he didn't do, like I said, and there were certain things that Kenny did do that proved successful. Overall, I think that it was a credible run. We saw what we could and what we couldn't do against BJ, but I don't think it was the last chapter. I think people saw in the first three rounds that Kenny has the ability to hang with him. It was one mistake with that takedown. Kenny let him get that takedown. If he didn't get that takedown, I think it would be a different story right now and we would be talking about something else.

PC: How is Kenny holding up after this loss?

KF: He's doing fine. After reviewing the fight; we've already reviewed the fight several times and after seeing his performance and what he did, he understands what I've been talking about and what we were saying in the corner. You're just going to go back and re-evaluate things and go from there. You can't just dwell on a loss and define your career on a loss. That's just ridiculous. We wouldn't have fighters like Georges St. Pierre and BJ Penn with losses on their record and coming back. It's ridiculous to define your career over one loss.

PC: Kenny told me no more than 3 or 4 months between fights from now on. How important is it that he fights in that time span because he was once a very active fighter?

KF: It's a huge deal. People who will actually know what I'm talking about know it's a mental aspect in the game that is very difficult. If you're in competition with somebody, even if it's a Jiu Jitsu match or a wrestling match, you go, for example, for a single leg and you don't get it. You go again and you don't get it and again. Mentally you have to be so strong to tell yourself, "I can do this! It doesn't matter if he stuffs me 100 times. I will get it on the 101 time." That plays with your head. And that's the type of mental struggle that I'm referring too. Although something might not be working or something might not be going your way, you have to be resilient and have confidence in yourself and your corner who is telling you to do this. It doesn't matter what happened before, just do it. Or even to tell yourself that it will come. You just gotta be resilient and stick to your gameplan and go from there. People who fight in the world championships in Brazilian Jiu Jitsu or Pan Ams, if they go for a certain sweep and it doesn't work, you don't go back to that move. You go to something else. But it's a little different when you're fighting a specific fighter and you're doing a specific strategy against them.

PC: What type of an opponent would you like to see Kenny fight next?

PC: I see where a lot of people think this is the perfect time for Florian-Sherk 2. Is that a fight that interests you guys?

KF: I would absolutely entertain that fight. Would it make sense? I don't think so. Sherk is coming off of 2 losses and I don't think that is what we're interested in. I'm thinking more like a Frankie Edgar, Tyson Griffin, Gray Maynard or Clay Guida or someone along those linesa Diego Sanchezwhoever is going to be in the top 5 that's going to get us back in title contention. I don't know who else is going to give BJ the run that Kenny did.

PC: I know Kenny will go back to the drawing board and tweak some things and be back in the mix. Is there anything you want to say in closing Keith?

KF: I would like people to check out our academy at www.florianmartialartscenter.com. We're going to come back stronger and better than ever. I want to thank the loyal fans. They've been writing a lot of encouraging emails and it's been amazing.