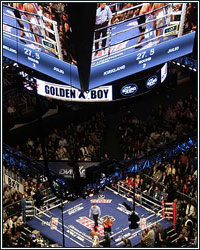 The time it takes to listen to a good tune, the number of minutes to cook a snack in the microwave, one eighth of your favorite television sitcom, is three minutes; one hundred and eighty seconds. For some, it is an instance, a fraction of time that can pass by unnoticed, but time has a strange way of working. It morphs with the surroundings encasing it, and inside the squared circle, three minutes can last a lifetime.

In amateur bouts, open fighters compete for 3 rounds; fresh pugs in the pros go at it for 4, and those at the pinnacle of the sport battle 12 three-minute rounds for the right to call themselves "Champion". But the actual number of rounds is irrelevant. Some fights are cut short due to a devastating knockout, accidental clash of heads, or one corner simply throwing in the towel to defend a fighter from hurting himself further. But all you need to get to know a fighter is one single round; just three minutes.

Even in the gritty chambers of the boxing gym, one three-minute round of sparing can tell you everything about a fighter's mood, a reflection of their day, maybe even their life. How he moves, whether he adopts a slick southpaw stance or the posture of face-first brawler, what he is willing to give and what he is willing to take will tell you all you need to know about a person.

Some boxers enter the gym after 16 long hours of menial labor; others come because it's the only thing that will keep them out of trouble. I've heard countless anecdotes of how the Sweet Science saved lives and strangely enough, a controlled environment of violence is what sometimes prevents fighters from committing violence outside in the streets. You might get a sprinkle of college grads or urban professionals looking to refine their abilities in unarmed combat, but most of the serious ones are in it because they want a better position in life, and there's no other option to go about it but to raise your fists and fight for it.

Boxing is the sport of the dispossessed; the gym a sanctuary for those outcasted from society. "I've had ex-convicts, rape victims and drug addicts walk through that door," my coach tells me. "Anyone that needs it can train." And sure enough, posted outside the gym door is a staunch reminder of this ethos: "This is a safe zone, all are welcome here." You don't need an academic scholarship to train here, or even a shred of athletic talent; just show up with the right attitude and you're good to go.

Most people who scurry in fresh off of watching an exciting bout on television are gone within two weeks. Where were the blazing fast fists? The back-and-forth action? Where was all the drama? Contrary to the exciting glitz of a bloody brawl, a boxer's training regime is incredibly boring. You might spend 2 weeks throwing only one punch, endless hours studying footwork, and there's a guarantee of at least 10 minutes of skipping rope in the exact same spot each time you walk in. But the ones that do stick around gain something. They find a discipline, a few sacred moments of silent focus, and for some, maybe even a momentary sense of peace.

The first sparring session is a frightening one. In those three minutes, you are tested of your will, your durability, and if you're lucky, your resolve at the prospects of defeat. You learn what you are afraid of; you learn what you can do, and more importantly, what you can't. But in any good boxing gym, sparring is never about beating up one another. It is a cultivation of skills, a solidifying of camaraderie, and an exploration into the Self.

The feelings are heightened when a fighter starts competing. Now you are not only fighting for yourself, but you're representing your gym. In a professional fight, the stakes are raised even higher as most fighters compete to quite literally feed their families, and given the dim prospects elsewhere in society, there is little alternative otherwise. The Greats fight for an entire nation, sometimes even a universal cause beyond themselves. Muhammad Ali's legendary bout against George Foreman legitimized his stand against Vietnam. Tito Trinidad fought in protest of the US bombings in Vieques, a small island part of his native Puerto Rico, and crimes on the streets of Manila comes to a virtual halt anytime Manny Pacquiao steps inside the squared circle.

Of course, boxing suffers its share of causalities. Benny Paret died ten days after taking nearly 25 unanswered punches at the hands of Emilie Griffth, the death of Duk Koo-Kim changed title fights from fifteen rounds to twelve, and each year the sport continues to add victims to its death toll. But contrary to the tragedies that sometimes bestow the sport, the intention behind these combatants is seldom to actually hurt one another. It is merely a contest, a payday for all the hours toiled inside the gym and for the monastic abstinence from worldly temptation outside of it.

So if you think boxing is nothing more than an exhibition of brute savagery, go into a gym, talk with the fighters; ask them where they've been, where boxing has taken them and where they would be without the Sweet Science. Just spend three minute with them, in person or the television screen. Three real minutes, and it might change your view on the whole thing.