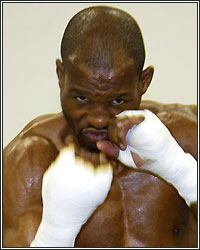 When former Two-Division World Champion Bernard "The Executioner" Hopkins enters the ring this Saturday, May 21 to face WBC and Ring Magazine Light Heavyweight Champion Jean Pascal at the Bell Centre in Montreal Canada, he will be 46 years, four months and six days old, over a half a year (192 days) older that George Foreman was when he defeated Michael Moorer for the heavyweight championship on November 5, 1994.  A win for Hopkins not only means becoming the Light Heavyweight World Champion again, but it also means he will break Foreman's longstanding record as the oldest fighter in boxing history to win a major world title.

"This fight is more about history than redemption," said Hopkins.  "I want to be known as the modern day Archie Moore.  Moore also went up to Montreal when he was over the age of 40, faced a younger hometown favorite [Yvon Durrelle] and knocked him out.  It means more to me to break the age record and prove that I am representing not just the older fighters, but older athletes in any sport."

Regardless of the outcome of Saturday's fight, Hopkins is already among an elite class of athletes who have made statements in their respective sports well into their forties.  Hopkins' first victory at the age of 40 came when he defeated Howard Eastman on February 19, 2005.  He followed that with wins over Antonio Tarver, Winky Wright, Kelly Pavlik, Enrique Ornelas and Roy Jones Jr.

"This is not just historically significant for boxing," said Oscar de la Hoya, president of Golden Boy Promotions and Ten-Time World Champion in six weight divisions.  "This is history making in sports...period.  For Bernard to perform at this level at his age is something to be honored, revered and noted by students of this game and sports fans across the board.  Yes, we have seen great athletes compete into their forties, but for Hopkins to be 46 and competing like this is just incredible."

"I am going to go out there on Saturday night and fight for all of the old guys out there," said Hopkins.  "I am living proof that life isn't over at 40.  I am leading by example to show that you can continue to do what you love well into your forties.  My motivation is to get in that ring and prove to the young lion that the old lion still rules the jungle."

NOTABLE ATHLETES OVER THE AGE OF 40*:

NOTE: If you have not seen HBO's "Face-Off: Pascal-Hopkins II," we invite you to do so by clicking on the link below. This five minute version of their face-to-face encounter is not to be missed.

"Dynasty II: Pascal vs. Hopkins" is presented by Groupe Yvon Michel and Golden Boy Promotions and sponsored by Casino de Montreal, Videotron and Coors Light.  The 12-round WBC, WBC Diamond and Ring Magazine Light Heavyweight World Championship fight will take place Saturday, May 21 at the Bell Centre in Montreal, Canada and will be televised live on HBO's World Championship Boxing beginning at 10:00 p.m. ET/7:00 p.m. PT in the United States and distributed live on pay-per-view in Canada on Canal Indigo, Bell TV, Shaw TV, Viewer's Choice and Sasktel in French and English beginning at 7:00 p.m. ET.  A 12-round light heavyweight bout between former World Champions Chad Dawson and Adrian Diaconu will also be featured on the telecast.  Dawson vs. Diaconu is presented in association with Gary Shaw Productions and InterBox.