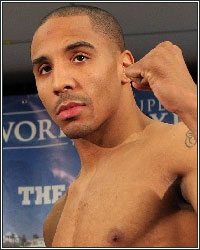 "I was able to do a little research and kind of dig a little bit deeper and actually reach out to the United States Anti-Doping Agency to see how much something like that would cost and the price is staggering," remarked undefeated WBA super middleweight champion Andre Ward, who recently shared with FightHype.com information he received from USADA regarding the cost to conduct random Olympic-style drug testing in the weeks leading up to a fight. Exactly how much does it cost?

"It costs $50,000 to $100,000 for 7 to 8 weeks to do random testing for both fighters. That's what I recently found out because that's something that I want to implement in my fight with Carl Froch, whether he wants to do it or not," explained Ward, who is contemplating the use of USADA Olympic-style drug testing for his upcoming title unification with WBC super middleweight champion Carl Froch later this year. "I believe Carl is a clean fighter, but I just think that with a fight of this magnitude, it would be great for the sport to implement something like Olympic-style drug testing," he continued. "The goal is to go through with it even if Carl doesn't want to. But again, the cost could be an issue, so we'll see."

Sharing the opinion of undefeated pound-for-pound champion Floyd Mayweather, Ward strongly believes that all fighters should take more stringent tests in order to ensure an even playing field amongst combatants. The exorbitant costs, however, are likely to make some fighters think twice about requesting Olympic-style testing. "I want to take things a step further and impelement it, not just talk about it, and be one of the first to actually do it outside of Floyd Mayweather," Ward added. "But it's hard to pay that kind of money unless you're making mega-dollars like Floyd and Manny. So I don't know, unless there's some help somewhere, I don't know how fighters are going to foot that bill."