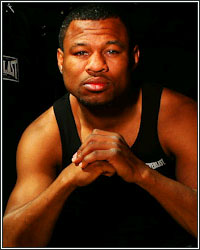 During yesterday's press conference in Los Angeles to announce the September 17th welterweight showdown between Floyd Mayweather and Victor Ortiz, Mayweather revealed that shortly after Manny Pacquiao's dominant unanimous decision victory over Shane Mosley, both he and Mosley had an interesting conversation over the phone. "If Shane Mosley gives y'all the real story, after the Pacquiao fight, I talked to Shane Mosley on the phone. Now once you guys meet up with Shane Mosley, ask him what he told me," Mayweather informed the media who were huddled around him and hanging on every word. What he said next, however, took everyone by surprise.

"Me and Shane talked and he told me the truth. These words are what Shane told me, 'Floyd, if I was you, I'd make Pacquiao take a test'," Mayweather said, suggesting that Mosley advised him that it would be wise for him to stand firm on his request for random Olympic-style blood and urines tests for all of his future opponents, particularly Manny Pacquiao. Mayweather did not go into any details about who reached out to whom, and it remains to be seen if Mosley will indeed confirm that the conversation took place, but the news left everyone speechless as nobody bothered to ask for anymore details. Was Mosley simply upset after his poor showing against Pacquiao?

Finally, nearly 15 minutes later, one member of the media asked Mayweather to elaborate on his conversation with Mosley. Mayweather would simply reply, "Shane Mosley, all he said is, 'You know what Floyd? If I were you, I would make him take the tests.' Basically saying before he went into that fight, he should've made him take the tests, basically." It's just one more twist in the ongoing saga between Floyd Mayweather and Manny Pacquiao.