ANTHONY JOHNSON: "WE JUST WANT TO GET THIS WHOLE SITUATION TAKEN CARE OF" 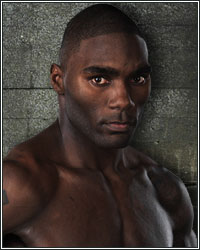 Fans, if you missed the free chat session with UFC welterweight Anthony Johnson, check out the entire transcript to see what he had to say fresh after his visit to the eye doctor. "It doesn't look bad right now, but it doesnt look good either....Right now, we just want to get this whole situation taken care of in the right way, but I would love a rematch," he stated as he talked about the eye injury he suffered at UFC Fight Night 14, appealing the verdict, his desire for a rematch and much more. Check it out!

THEHYPE: FightHype.com would like to welcome Anthony Johnson to tonight's chat session.

CanadianDragon: Hey Anthony thanks for being here this late how was the trip to the doctors?

ANTHONY JOHNSON: It wasn't as exciting as I was hoping it would be. Any time you go to the doctor, it isn't good, but I go back tomorrow and I will know more.

The C.E.O.: Hey, Anthony.....welcome to our chat....tough break the other night....I personally think you were TOO gracious....anyway....I hear you're from Georgia....ever been through Chattanooga?...if so....what do you think of the town?

ANTHONY JOHNSON: I've been through there. It's cool. You could never be too gracious when two guys are fighting for something they love. Everything happens for a reason and it's all good. I've never kicked it down there in Chattanooga.

dangibbons: Rumble...great fight and bullshit call. So give us the scoop. What did the doctor say at this point? Did he tell you how bad it might be?

ANTHONY JOHNSON: I went for the first time today. It doesn't look bad right now, but it doesnt look good either. As soon as I find out more, I'll give you all of the info you need right here on FightHype.

koking: Did dana say anything to you about your fight with Burns? Did he give your bonus money cause you were winning that fight easily and you deserve that?..by the way Bull shit call...are you going to appeal and do you think it will do any good?

ANTHONY JOHNSON: I talked to Dana after the fight. He told me, "Great fight!" As far as the bonus money, that's E-14 classified. I'm going to appeal it and my agent, Ken Pavia, is going to appeal it and Dana thought it was bullshit whether it was unintentional or not. I dont think the UFC wants fights to end that way.

BigPoppaPump: I'm glad you guys are going to appeal it. Has Dana mentioned that you might be getting an immediate rematch?

ANTHONY JOHNSON: No. That's the last thing on our mind right now. Right now, we just want to get this whole situation taken care of in the right way, but I would love a rematch!

AKay: Hey Anthony thanks for joining us, what timeline do you give yourself to be ready to challenge for the belt?

ANTHONY JOHNSON: Give me 2 years and hopefully I will be at the top and fighting for the belt, but only time will tell.

CanadianDragon: Who's idea was it for you to go to the doctors today? was it you or was it your trainer's / ufc mangement?

ANTHONY JOHNSON: Everybody. As soon as the fight was over with, the UFC doctor and everybody was begging me to go to the doctor.

ANTHONY JOHNSON: They checked me out and wanted to make sure I was okay so I followed up with a visit.

dangibbons: I clearly thought you were on your way to a victory. You showed great class in accepting defeat, but honestly, does that frustrate you knowing that you had the fight won and they just handed it to Burns? If they don't overturn the decision, do you think the loss will be a setback in any way?

ANTHONY JOHNSON: Yeah, I was pretty disappointed in the TKO call. Burns was a test and they put a decent grappler against a decent striker and I think I held my own because he never came close to pulling off a submission on me. Everyone knows what type of person I am and this won't set me back.

koking: Anthony you had great take downs against Kevin but it didn't seem you were attempting to do anything once you got thereEven Rogan seem to think so on the telecast. Were you tired or was his guard that good that you couldn't seem to want to pass it and waited to get stand up? does alot cutting weight affect your peformance?

ANTHONY JOHNSON: As far as taking him down, I told my coach that I was going to take him down just to show I could do it. I wasn't gassed or anything like that. I don't worry about passing guard and all of that. I just want to beat you up and I feel like I can do that better in guard. I was never tired. I caught myself a few times holding my breath.

ANTHONY JOHNSON: No, actually I feel better than ever. I eat clean and I'm stronger than most of my competition so the weight cutting is actually better for me.

koking: dont think anyone can stop your take down thanks

ANTHONY JOHNSON: Thank you! I hope not.

BigPoppaPump: Not to change gears here, but what's up with you and Diego Sanchez? I thought I read somewhere or heard on a radio program that you're not a big fan of his. LOL.

ANTHONY JOHNSON: Diego is a great competitor, but I wasn't crazy about Diego because of the show, but I was young. You have to maintain a character and I think that's what he did. I would love to fight Diego one day. He's one of the best and why wouldn't you want to fight the best.

CanadianDragon: When your not training what do you do in your sparetime?

ANTHONY JOHNSON: I kick it with my friends a lot. I have an up-and-coming kennel. If I'm not with my boys, I'm doing something with my dogs. I love dogs. I'm a laid back guy so that's about it.

dangibbons: What did you think of Anderson Silva and Fedor's peformances and if you had to pick between the two, which one do you think should be #1 P4P?

ANTHONY JOHNSON: I didnt see Fedor's performance yet, but I know it was great. I dont think Anderson has performed to his full ability yet. I have to give it to Fedor right now because he's been doing his thing for so long. Anderson is definitely #2 though. It's tough to maintain what both of these guys have been doing, but Fedor has been doing it for so long.

koking: It says you spent time with Chute Boxe how was that experience and what was the reason for your departure. I mean that year you Wandy Shogun Ninja left the same time. What is so bad with chute Boxe that caused you all to leave...and how do you like training with cung le and do you knowwhen is his next match?

ANTHONY JOHNSON: As far as Chute Boxe, their style used to be to beat each other up. I was with a different coaching staff. I was with Chute Boxe USA, not the original Chute Boxe. As far as me leaving Chute Boxe, it was just too much drama. I was learning a lot, but it was just too many liars and thieves and I don't want to associate myself with that. I don't know when Cung Le will be fighting next. I'm sure he will let us know when he finds out. He's a great teacher though.

THEHYPE: FightHype.com would like to thank Anthony Johnson for taking time out of his busy schedule to chat with us tonight.

ANTHONY JOHNSON: Thanks for being so patient FightHype.