PAULIE MALIGNAGGI: "I DON'T APPRECIATE THE WAY I'VE BEEN TREATED" 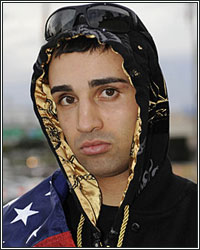 "I'm not just complaining about these people. I have proof that they've done a bad job in the past and they're not qualified to be on the judges panel for my fight with Juan Diaz. And they still didn't do anything about it. It's one thing to go to a guy's hometown and fight him in his hometown. I don't mind rough crowds. I've gone through it before. It's another thing to tie my hands behind my back and fight the guy with no hands. They're basically doing everything but that so far...I'm ready to hurt him, I'm ready to throw combinations and I'm ready to throw down on Saturday night," stated a fired up former jr. welterweight champion Paulie Malignaggi as he shared his frustration and belief that the fix may be in if his fight the Saturday with Juan Diaz makes it to the scorecards. Check out what he had to say about his displeasure with the judges selected to score the bout and much more.

BT: What's up champ? So we're four days away from the big fight. How's your weight looking?

PM: You know what, that's actually the reason why I wanted to contact you. I'm putting it out there. I've agreed to everything for this fight. Okay. I've agreed to all the stipulations without taking any extra money. If I did try, they would have said, "Oh, we'll just give it to Rolando Reyes, the fight." So I said, "You know what? Fuck it!" I wanted a chance to show everyone what this was all about and I wanted to show everyone that I could still fight man, you know what I mean? So I needed this opportunity so I had to take it then. So I took it at 138.5 pounds. I wanted the ring to be a normal 22-foot ring, but no, they wanted an 18-foot ring so I had to give in on that too. We were assured neutral judges by Richard Schaefer two months ago before I took the fight when I was getting ready to fight Alvarado. He said, "Well, if you face Diaz, we'll promise you neutral judges." I said, "Thanks, but no thanks. I was fighting Alvarado." Once Alvarado pulled out and we agreed to this fight, they didn't give me neutral judges. They gave me a judge from Texas [Gale Van Hoy]. One of them is a home Texas judge who had Chris John vs. Rocky Juarez as a draw dude. That's all you need to know about the guy. I did't want that guy as a judge and they wouldn't budge on that. Okay, so there's two neutral judges and we end up with Raul Caiz Sr. and CJ Ross from Nevada. Raul Caiz Sr. is a Mexican from California number one. That's one reason why we don't want him. Number two, he's Golden Boy's gopher. He was referee for the Victor Ortiz fight and when Victor Ortiz got up and quit against Marcos Maidana, Raul Caiz Sr. took him over to the doctor and made the doctor understand so the doctor could stop the fight to save Ortiz from quitting outright. That instance shows you the corruptness that Caiz Sr. has and he's Golden Boy's gopher. And then, the one neutral judge we had, CJ Ross, they replaced her this week with a judge from Oklahoma. Now come on man. We know what it is. I'm giving people proof man. I'm giving people proof. Caiz Sr. was also one of the judges for the Raheem vs. Erik Morales fight two or three years ago. What happened in that fight? Raheem schooled Morales. Two judges had it 118-110. Caiz Sr. was the third judge. You know what he had it? You know what he had it Ben? 115-113. I have proof. I'm not just complaining about these people. I have proof that they've done a bad job in the past and they're not qualified to be on the judges panel for my fight with Juan Diaz. And they still didn't do anything about it. It's one thing to go to a guy's hometown and fight him in his hometown. I don't mind rough crowds. I've gone through it before. It's another thing to tie my hands behind my back and fight the guy with no hands. They're basically doing everything but that so far. I'm not looking for any advantages in this fight, I'm just looking for a fair shake, man. That's all I want. But these people are making it very difficult. The one thing I can assure you though, I had a great camp, I'm very ready for the fight and as much as they are making my hands full for the fight Saturday night, I assure you they will have their hands full regardless because when they ring that bell, Juan Diaz can't have anyone else there. It's me and Juan Diaz and I got him to myself for 12 rounds. Believe me, they're going to know exactly what I'm talking about.

BT: Woooooooooooo! I can't wait till Saturday man. So you can't do anything about it?

PM: Ben, it's ridiculous man. Everybody knows boxing is a joke of a sport and a corrupt sport as a business. I've seen it and I could write a book about the bullshit I've seen in this sport. The fans and the media have no idea what goes on behind the scenes. It's a fucking joke. It's a fucking ridiculous joke. This right here! Man, it took the cake man. I've never seen anybody go through this shit the way I'm going to have to go through this shit Saturday night.

PM: (Cuttin in) I don't want to get blackballed by HBO. I don't want to do HBO like that. It's fight week dawg. I like HBO. They gave me this opportunity right off the bad performance of the Hatton fight. I don't want HBO to fight the fight man. I don't want to screw them, especially since they had a lot of people pulling out this summer. At least they can have one fight this summer where they've been actually looking forward to it for awhile and still actually happen because everybody has been having to pull out or postepone because people don't make weight and so forth. At least I'm doing my part as a fighter and a man and doing my job, you know what I'm saying? But I don't appreciate it the way I've been treated. It's fucking ridiculous. I told these guys, "I'm not gonna let you rape me and I'm going to bend over for you. If you're going to rape me, you're going to have to bend me over and do it!"

BT: Number one, that's fucked up and number two, how's that going to affect your performance in the ring?

PM: Do I feel I need to knock Diaz out in the fight? I think that basically would eliminate any risk. I mean, you knock him out and you get the win no matter what, you know what I mean? At the end of the day, I'm not the biggest puncher, but I'm a very, very tough fighter. I'm ready to hurt him, I'm ready to throw combinations and I'm ready to throw down on Saturday night. Believe me. I had a fucking good camp man. Like I said, the things I've been talking about, what me and my new trainer have been working on and everything, you're gonna see the Paulie Malignaggi that you should have been seeing in these past two years and you'll see that my title reign was marred by this bullshit that had to happen. Because I'm a much better fight than I showed when I was a world champion. This is going to show it. This is the beginning. Whether they fuck me or not, whether I stop him or not, whether I get a decision or not, regardless, if anything, you will see the performance and that's an important thing to me. People need to see that. Paulie Malignaggi can fight his ass off and it's about time he started getting credit for that.

BT: Honestly bro, I think you should have been given that credit ever since the Cotto fight.

BT: So Diaz is going to have to get punished for that?

PM: Well, he's their pawn in this whole scheme. Golden Boy wants to say they're going to try to help boxing and fix boxing. Yeah, they help their fighters, I'll give them that bro. Their fighters get well taken care of and I've never heard of anybody complain about Golden Boy as long as they're signed with them. But, but there are fighters that aren't signed with you and if you're really going to help the sport, I'm not saying help the other fighters, but don't fuck them either. There are fighters that are not signed with Golden Boy. I'm not signed with Golden Boy, but I'm not asking for any handouts and I'm not asking for any favors. I'm just looking for a fair shake. Why can't we find out on Saturday night who's better, Paulie Malignaggi or Juan Diaz? Why do we have to go through the extent of having everybody fucking shit up? Why? Why's it got to be like that? This is boxing. Like I said, boxing's corrupt and boxing is a bullshit sport and a bullshit business. That's why nobody fucking watches this shit anymore, in this country especially.

PM: Yeah, you will, but it's a niche sport. It ain't gonna get new fans, I'll tell you that. More fans will be turned off every year because of shit that they find out or because of a bad decision. I've seen plenty of people tell me, "Oh, that was a horrible decision. I'll never watch another fight again." It happens every year. We lose fans like that every year.

PM: (Cutting in) People actually stop watching the sport over a controversial decision. I've had people tell me that they've never watched a fight that happened five years ago, ten years ago, whatever; they stopped watching boxing because of that one fight.

BT: Yeah. Well man, that's messed up about that whole situation with the judges.

BT: I don't want to hold you up. I know you're about to jump on that plane. Is there anything else you want to say in closing?

PM: What's happening here has probably happened in the past to people that didn't open their mouths. It happened to me and I'm opening my mouth and it's probably going to happen in the future to other people. What's happening here is not going to fix boxing because boxing, like I said, it's a bullshit sport and it's a bullshit business. But I'll tell you one thing, I'm not just going to let them get away with it. People will find out about it. That's my intention here. If I can get the knockout, beautiful! If I don't, now I'm fucked. But we'll see come Saturday.