KING MO: "JON JONES IS THE KING OF HOE MOVES" 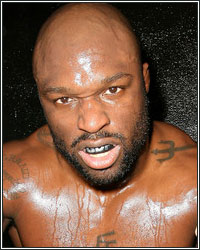 After deleting his Twitter account in order to spend more time being productive, former Strikeforce light heavyweight champion King Mo Lawal decided to host a mailbag on FightHype.com to stay in touch with fans and answer any and all questions related to himself, mixed martial arts, boxing, or just about anything. Send an email to King Mo at kingmo@fighthype.com and maybe next week, you too can see your questions and Lawal's responses in Mo's Midweek Grind. Check out what fans were asking and what King Mo had to say in this week's mailbag as he touches on Bernard Hopkins, Floyd Mayweather, and the beef between UFC light heavyweight champion Jon Jones and former champion Rashad Evans.


What are your thoughts on Jon Jones forwarding that text message to that media outlet. To me that's some bitch shit and then for Rashad to issue an apology was even worse. Look at the end of the day these guys are fighters and you say whatever you have to, to gain an edge. The text message was sen for Jones personal use; it's not Evans fault that he chose to forward it on...your thoughts King? T-Money

King Mo: Personally, Jon Jones is the king of hoe moves. That's shit your ex-girl, Superhead, or Kat Stacks would do. I wouldn't apologize for shit and I don't think Rashad should either. Like I said before, that's some hoe shit; petty in my eyes. So what? He called Jones a white boy? I've heard worse and y'all have too. It's funny how some fans wanna be PC and shit, but then some of these same muthafuckaz wanna pay to see some organized violence. LOL! Or they boo if a fight ain't violent enough. LOL!

Man props to BHop and the performance that he put on. Do you consider his performance, better, worse or equal to what George Foreman did some years back?

King Mo: The performance was a little less than equal. Hopkins looked amazing, but he was the favorite to win in my opinion. I didn't think Foreman had a chance. Hopkins was more skilled than Pascal. I think Moorer had more skills than Foreman from a technical standpoint. Moorer wasn't no punk and was in shape. Pascal fights with a lot of nervous energy and would gas.

Even though Floyd did that piece for fighthype still didn't answer the burning questions. To me Floyd is like a politician all talk with no substance. Nobody wants to hear about past shit. We want to know what's revelant now and when will he fight again or manny. Manny has already accepted taking the blood tests up till a few days before the fight. Floyd more worried about losing then making money and letting those steroids talk keep him away from paq.

King Mo: I can tell you kinda don't know what you're talking about. Floyd asked for RANDOM DRUG TESTING! Having a cut-off date before the fight ain't random. Do your research! I've been through the Olympic testing. It ain't no joke.

Hey King Mo.. this is ur good ol buddy Pnut.. dude why do u not shave before ur interviews or TV shows.. all the homies here in Plano wanna know why u keep doing the home team like this?? With that Wendy Williams cat hair on your face. LOL!

hi KING M0W LAWAL, i really Like you for supporting $UGAR SHANÓ M0$LÓY against PA9HIAO, i'm gLad you're now training with R0GÓR and big FL0Yd MAYWÓATHÓR whu is also training B-J PENN. you're NIJÓRIAN and AFRICAN-AMÓRICAN, is that why you're named after a NIJÓRIAN politician? i've been reaLLy sad since after 2011-5-7, because $UGAR $HANÓ M0$LÓY is one of the nicest man in the worLd, he supports PETA, he is the bravest and the greatest fighter in worLd. i think $UGAR $HANÓ M0$LÓY should have meet 0BAMAH instead of the other guy, because they're both AFRICAN-AMÓRICANs. what an insuLt. Someone shouLd wave the TANZAN of S0MALIY fLag against kÓNYAH. i heard of a joke. why are kÓNYANs good marathoners? because they're alway running from the S0MALIYs. thank you KING M0W LAWAL. - PAUL

King Mo: Lol. I felt like both fighters should've had the chance to meet Obama, regardless of race.

mO, IM SURE YOU WERE TORE UP OVER THE DEATH OF RANDY "MACHO MAN" SAVAGE. WHERE DO YOU PLACE HIM AMONGST YOUR FAVORITE OF ALL TIME??? ERIC

King Mo: BHop easily! Look at their resumes. BHop went undeated from '93-'05. He defeated Wright, Pavlik, Tarver, Jones, and Pascal. He's been boxing since '88. Randy is a beast too!

Mo, I gotta say that I was shocked not to see you competing on the Dallas card. Is it something we don't know about a lingering injury or did they just decide to go in another direction with you? Holla back. Hope all is well.

King Mo: I ain't got no idea my damn self!

Daniel Cormier may be in a little too deep taking a short notice fight against "The Snowman." I know he is your boy. Is this a winnable fight for him? Snowman has a ton of experience. What do you think are the key's to a victory for DC?

King Mo: Easy fight for DC. Snowman got experience, but that's it! DC got cardio, speed, power, wrestling, youth, and intangibles on his side. Monson just got a good top game with his BJJ. Other than that, he can't take DC down. Look for DC to punish him for 3 rounds like Rizzo did or get him outta there in 2.