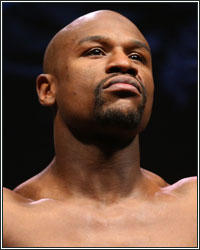 BT: How do you deal with criticism or negativity and not let it affect you while you're training for a fight?

FM: Once you get to a certain level, it could be a Michael Jackson, a Beyonce, a Michael Jordan, a Floyd Mayweather, a Muhammad Ali, people are not going to always have good things to say about you. Just like you embrace the good, you have to embrace the bad the same way. You gotta let people say what they want to say and you gotta continue to be positive and stay focused on your task and stay focused on your job so you can stay at the pinnacle of what you do.

BT: For most people though, just ignoring it is something that's a lot easier said than done.

FM: Um, I think that early on, because I've been a professional since I've been a teenager, but when you first see a negative story about you or hear something negative about you, you're like, "Aw, I can't take it." But then, that's still not going to change me. I'm still great at what I do. I got to be doing something right to still be in this position. If you're doing good, people are going to talk. If you're doing bad, people are going to talk. But the main thing is keep 'em talking about you.

BT: What would you say has been your blueprint to staying on top for so long?

FM: Well, how I stayed at the top was, my thing was to say, "Floyd, no matter what, you're put in this position for a reason." I always try to tell the fighters, I say, "We all are in the same business, but I just got a different sales pitch." Find your sales pitch, find your niche, and find a way to win, and that's what I did.

BT: There's gotta be more to it than that though. I mean, you're the highest-paid athlete in the world, and yet, it still seems like you're hungrier than everyone else. Like Haglar said, it's hard to get out of bed to do roadwork after sleeping in silk pajamas. How have you been able to do it after so many years?

I have so many different business entities that I'm involved with and that I'm working on. For social media, I got an app called Shots that you can download for iPhone and Android. It's an app for everyone; elementary school students, jr. high school students, high school students, and even adults. It helps promote anti-bullying by letting you post pictures and promote yourself or promote your brand without having to deal with some of the negativity that's out there on social media. You can follow people and when you put pictures out there, people can only like them. They cannot make any negative comments because you cannot comment on anyone's photo, so that's the great thing about our app, Shots. Also, I'm steady building my brand, the TMT brand, and we're about to put that in stores all over the world. I'm building Bad Medina's make-up line. It's taken awhile because she wants to put out an extraordinary product. We don't want to put out just anything. We want to give the people their monies worth. So we're working on her project. And my daughter's mother, she has a beauty bar and boutique, Devanna Love. We're working on her second beauty bar and boutique. Ricki Brazil, my childhood friend that I've known for probably 25 to 30 years, great guy, extremely humble, he has the women's clothing line.

And of course Leonard [Ellerbe], who was making six figures working in DC, came out here and first started working for me getting maybe $4,000 a month, but now, he's the CEO of Mayweather Promotions and he's a multi-millionaire, so I'm doing my job and I'm just helping everybody around me grow. I just want to continue to surround myself with level-headed people that want to grow and become better and become entrepreneurs. Mayweather Promotions, we are the past, the present, and the future of sports entertainment. The Money Team, we're going strong. It's not all about making money. It's also about giving back and being rich at heart, and we feel giving back is being rich at heart.