OSCAR DE LA HOYA TALKS CANELO VS. COTTO: "OUR SIDE IS DONE...IT'S NOW UP TO COTTO"

KEITH THURMAN HAS A MESSAGE FOR FLOYD MAYWEATHER

KEITH THURMAN SAYS HE'S NEXT IN LINE FOR MAYWEATHER'S THRONE: "IF HE'S THE KING, I'M THE PRINCE"

KEITH THURMAN EXPLAINS HOW HE WOULD DESTROY FLOYD MAYWEATHER: "I'LL DEFINITELY TAKE IT TO HIM"
Tweet

FLOYD MAYWEATHER: "I'M JUST TIRED OF THE FANS BEING MISLED...BOB ARUM IS IN THE WAY" 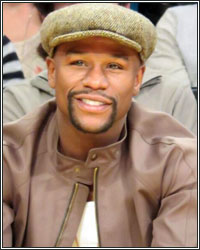 "I just got to a point where I'm just tired of the fans being misled and lied to...Like I said before, we have been trying to make the fight happen for a long time behind the scenes. Before, all I asked for was random blood and urine testing, but Bob Arum and Pacquiao's camp had a problem with that. That's why the fight didn't happen before...Bob Arum is in the way of the Mayweather-Pacquiao fight...They have been lying to the critics, all the websites, the blogs, social media and everyone for years," stated undefeated pound-for-pound king Floyd Mayweather, who had a lot more to say about a potential clash with 8-division world champion Manny Pacquiao. Check out what else he had to say in this exclusive interview as Mayweather talks about Bob Arum getting in the way of the fight, the recent tragedy of his friends, and more.

BT: Champ, you had a lot to say during the Showtime broadcast. Was there a reason why you wanted to make those comments about the potential fight with Pacquiao?

FM: I just got to a point where I'm just tired of the fans being misled and lied to. We like to handle business like true professionals, behind the scenes, and then once we sit down and come to an agreement, we like to bring everything to light and tell the fans, "This is who I'm facing." That's what we've been doing for years. Like I said before, we have been trying to make the fight happen for a long time behind the scenes. Before, all I asked for was random blood and urine testing, but Bob Arum and Pacquiao's camp had a problem with that. That's why the fight didn't happen before. Then after that, I offered Manny Pacquiao $40 million, but he said "No!" He wanted 50/50. So then I said, "Well, it's obvious you don't want to fight because you're not the A side." Of course we all know he's not the A side by his pay-per-view numbers. Now he lost to Marquez, he lost to Bradley, and his pay-per-view numbers are horrible. I'm not 100% sure, but from what I've been told, he hasn't even reached 300,000 homes [for his fight with Algieri]. We'll have to keep our fingers crossed for him to reach 300,000 homes. And not taking nothing away from the guy, I don't really know his name, Algieri, he tried his best from what I heard, but Algieri and Maidana are two totally different fighters. Two totally different fighters! So basically, you guys are constantly talking about "you want to fight, you want to fight." I'm the A side, so if I'm the A side, the A side calls all the shots: Mayweather Promotions, Showtime pay-per-view, 147 unification bout, and that's basically it.

BT: It seems like both fighters want the fight, so fans want to know why the fight hasn't been made yet. Is there something holding up negotiations?

FM: Bob Arum is in the way of the Mayweather-Pacquiao fight. People don't really understand business. I was once with the promotional company Top Rank. I left Top Rank to become my own promoter. It was hard doing business with Bob Arum when I was signed to his company, so if I'm not signed to his company, you know it's going to be even harder because he's going to be trying to do whatever he can do. Me knowing Bob Arum for 18 years, in my opinion, Bob Arum only cares about Bob Arum. That's the feeling that I felt forever.

BT: When you say that Bob is the one that's in the way of the fight, is there anything in particular that he is or is not doing that makes you think?

FM: They have been lying to the critics, all the websites, the blogs, social media and everyone for years. We never came out in public and spoke about the fight because a lot of times, I say certain things, but Manny Pacquiao, he don't really understand when I'm speaking slang. When I do say certain things, it's obvious whatever I'm saying gets under his camp's skin, and then the next thing you know, I'm hit with a lawsuit for defamation of character just because I voiced my opinion or I was having fun talking trash. I think that's a coward move. You know, people that's in the entertainment business may take shots at Floyd Mayweather and say certain things about Floyd Mayweather. I beef with people that's in my field or do what I do. If I was an R&B singer, I would probably beef with other R&B singers. If I was a rapper, I'm pretty sure I would beef with other rappers. If I was a football player, I would beef with other football players. I'm not a boxer that's going to beef with a basketball player. I'm a boxer that's going to beef with other fighters because that's what I do.

Ben, the sport of boxing has been great to me. The fans have been unbelievable. I think the expectations for Floyd Mayweather are so, so high. The bar is set so high. I mean, no matter what, it's never going to be good enough. With everything that's going on in my life, I love everybody and I don't have any hard feelings towards no one. I've said some things about Oscar in the past and he spoke about me in the past. We're human. Those things happen. I've never claimed to be perfect. That's a joke that I always say amongst my camp. I say, "Nothing or no one is perfect." Then I say, "You know what? God only made one thing perfect and that's my boxing record (laughing)." It's just a joke we always say. But like I said before, I'm still learning, still living. I have good days, I have bad days. You know, I just went through a lot. It was a tragedy, as you know. Earl Hayes and Stephanie Moseley both were my friends and they both will be missed. I loved both of them.

BT: I can't imagine having to process everything that happened and still dealing with the negativity out there.

FM: Like I said before, you live and you learn. With that incident that happened, I mean, it's hard. People grieve differently. It's hard, but I cannot stop living. People think that I should just stay in the house and just mope and cry? No! I'ma do what Earl Hayes would want me to do and I'ma do what Stephanie Moseley would want me to do; continue to live and continue to try to make my team stronger and try to make this world a better place. Sometimes when I'm at home alone, I reflect back on my life and think about a lot of things. They always say, "What don't kill you makes you stronger." I use everything as motivation to become better at what I do.

BT: Floyd, I know your time is limited, so I appreciate you taking a minute to speak with me. Before you go, is there anything else you want to add?

FM: I want to thank all my fighters for going out there and fighting hard and making my company look good. It wasn't easy for the fighters tonight. Ishe came up short, but I love Ishe Smith. He fought his heart out. Lara was just the better man tonight. I congratulate Lara, and I want to tell Ishe, "Keep your head up. I'm behind you 100%." And Mayweather Promotions, we are here to stay, and we are the past, the present, and the future of sports and entertainment.