BOB ARUM TALKS BRANDON RIOS RETURN AND SPLIT WITH ROBERT GARCIA: "I WAS AS SHOCKED AS ANYBODY ELSE"

FLOYD MAYWEATHER EXPLAINS WHY HE BET ON TYSON FURY OVER KLITSHCHKO; LIKES FIGHT WITH DEONTAY WILDER

FLOYD MAYWEATHER SAYS HE COULD SHUT DOWN CANELO VS. KHAN BY FIGHTING DANNY GARCIA IN 50TH FIGHT 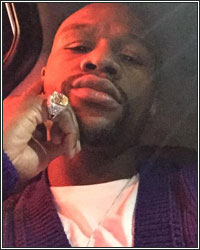 "You know, it's funny. My videographer, James Dayap, one of the best videographers in the world, came to me and said, 'Floyd, look what they're saying, trying to say that this fight is bigger than you and Pacquiao.' I mean, records are made to be broken. We'll just see what the numbers do. We can't really say. Anything can happen. They probably can make, I don't know, what, $74 million or $73 million at the gate. It's possible, you know," stated retired undefeated former pound-for-pound king Floyd Mayweather, who shared his thoughts on whether or not the intriguing May 7 showdown between middleweight champion Canelo Alvarez and former world champion Amir Khan could be as big as his record-setting mega-fight with Manny Pacquiao. Although Mayweather was clearly being sarcastic with his response, he made it a point to remind everyone that he'd quickly take back his pay-per-view throne should he announce that he's returning for a 50th fight.

"You know, I can easily put a halt on that fight if I chose to call Mr. Garcia, [Danny] Garcia's dad, if I chose to call him and say, 'You know what, sir, you're a hell of a trainer, you're son's a hell of a fighter, he's an undefeated champion, I'm an undefeated champion, and I think it would be great for me and your son both to make a lot of money. And like I said before, you're very outspoken, my dad is very outspoken; it would be good for me to come back for number 50 and fight the undefeated Danny Garcia, you know, at the MGM Grand.' You know, since Danny Garcia is undefeated and he's very explosive, he's a very good fighter, and he really represents Puerto Rico the same way that Trinidad dad. Even though he's from Philadelphia, he represents the red, white, and blue for Puerto Rico. I'll go over to the MGM Grand and say, 'You know what? We need a venue also,' and we'll see," Mayweather informed FightHype.com during a recent conversation.

FLOYD MAYWEATHER BACKS BEYONCE AND SUPER BOWL PERFORMANCE: "ANYONE ELSE, THEY WOULDN'T HAVE NOTHING TO SAY"